Are All QSRs Created Equal? A K-Means Cluster Analysis 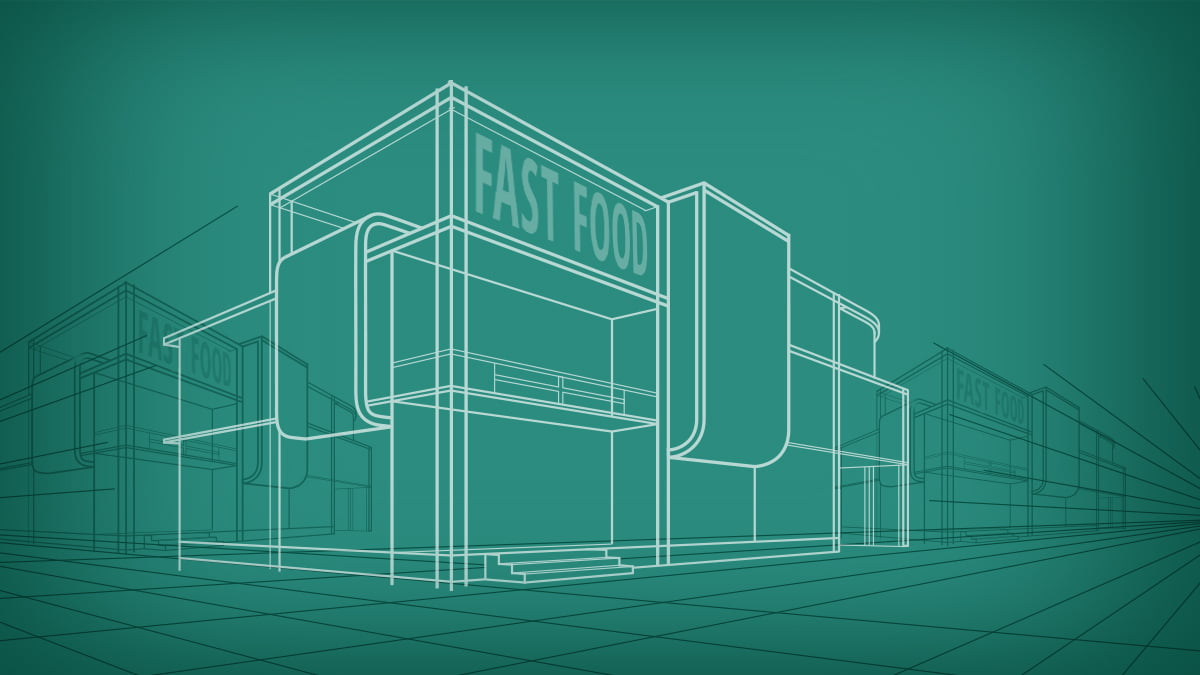 Now, the Zion & Zion market research team turns its attention to a k-means cluster analysis of the top 26 QSR brands by using the brand personalities defined by Aaker (1997) and the brand personality appeal identified by Freling, Crosno, and Henard (2010).

The Zion & Zion research team sought to gain a deep understanding of the brand personalities of the 26 largest QSR (quick service restaurant) chains in the U.S. We surveyed 4,363 adults 18 years of age and up. Each respondent was asked about one of the 26 QSRs. Our research team only included data from those who were at least somewhat familiar with the particular QSR they were being asked about. That resulted in a usable data set of 3,205 responses.

Cluster analysis of the 26 restaurants yielded five distinct clusters. Of note is Starbucks ending up in a cluster alone with the highest scores in Excitement, Competence, and Sophistication. The four other clusters could be categorized as having high Sincerity, high Ruggedness, low negatives, and low positives.

These clusters are useful in finding the natural groupings of different restaurant brands. It is also particularly useful for brands looking at positioning themselves to be unique and find a competitive advantage. Even though Starbucks does not have the highest scores in every category they have successfully created a unique brand personality.

Figure one shows all 26 of the QSRs studied plotted based on their average brand personality rating. 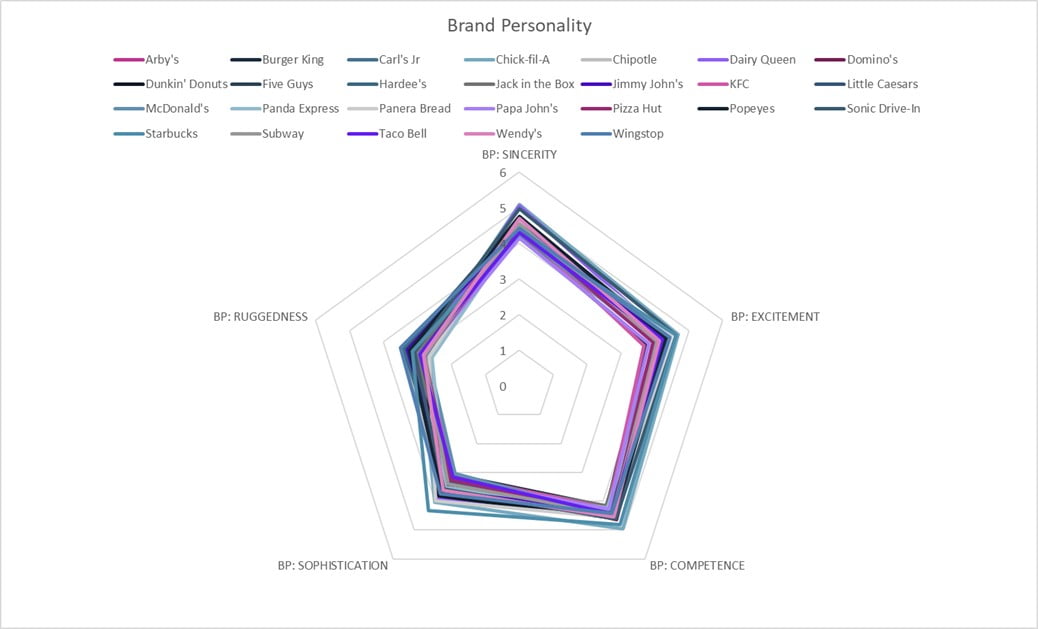 Figure one shows that all the QSRs studied have close to the same brand personality. This is particularly important because while the scores appear to be very similar, we know that the difference in brand is large between a high scoring restaurant like Chick-fil-A, and a lower scoring restaurant like McDonald’s as we can see in Figure two. So, a small improvement in brand personality scores can make a large difference in how consumers perceive the brand. 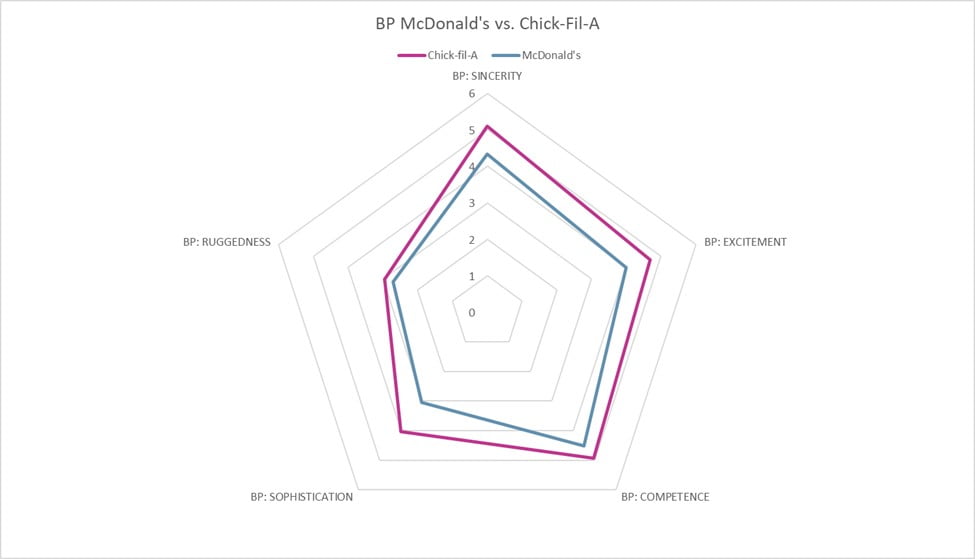 Next, we clustered the restaurants based on their brand personality. Figure three shows the average brand personality trait scores of the five different clusters, and Figure four shows which QSRs are in each cluster. Figure three has been formatted using color coding. It shows high scores on positive personality traits (e.g. Sincerity) in green and low scores in red. It also shows low scores on negative personality traits (e.g. Egotistical) in green and high scores in red. There are several interesting findings in the clusters. First, it is interesting that Starbucks ended up in Cluster four alone. Secondly, we see that Cluster one has generally low scores and Cluster three has high scores. Cluster two has very low negative scores and finally Cluster five has a high Ruggedness score. 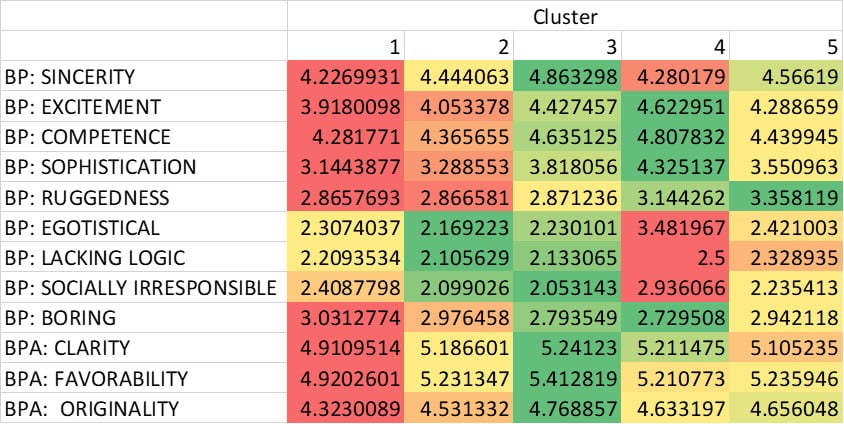 Cluster three had the best overall scores, so we decided to dig a little deeper. We started with another cluster analysis on just the six restaurants in this cluster (Chick-fil-A, Dairy Queen, Dunkin’ Donuts, Panera Bread, Sonic Drive-In, and Wendy’s). Figure five shows the average brand personality scores of the three sub clusters in the current Cluster three and Figure six shows the cluster membership. 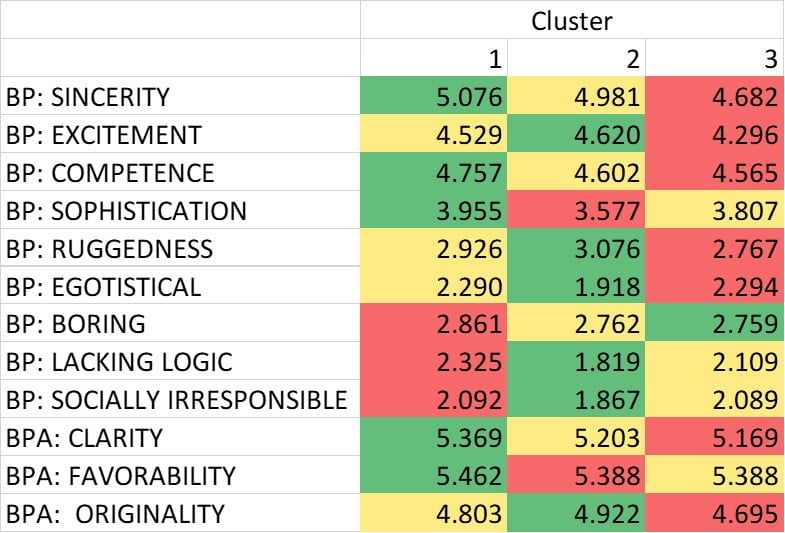 In subgroup one we have Chick-fil-A and Dairy Queen that have the highest Sincerity, Competence, Sophistication, Clarity, and Favorability. Subgroup two contains only Sonic and has good scores in Excitement, Ruggedness, and Originality and good low scores in the negative areas of Egotistical, Lacking Logic, and Socially Irresponsible. Finally, in subgroup three we have Wendy’s, Panera Bread, and Dunkin’ Donuts who scored low in the negative category of Boring but also scored low in most of the positive categories. It is important to remember that while subgroup three appears to have low scores, they are only low in relation to the other three restaurants in this study, and compared to the other 20 restaurants in the broader study they have high scores. Sonic has done well to be in the high scoring cluster in the broader analysis and then find its own subgroup as the most Exciting, Rugged, and Original of the six.

We urge caution with respect to being tempted to crown winners based on their brand personality rankings. The same goes for denigrating those that rank low on any dimension. The data is only a portrait of consumer perceptions—i.e., “what is” as opposed to “what’s best.”

For example, Starbucks leads the pack in Sophistication and McDonald’s trails the pack. However, Starbucks may indeed wish consumers to perceive it as relatively sophisticated while McDonald’s may not—although we suspect that McDonald’s would not wish to be in last place.

It is incredibly interesting that Starbucks has managed to land into its own cluster. This is something that could contribute to a competitive advantage for Starbucks, because it has clearly created a unique brand image, enough to distinguish itself from all of the other QSRs including Dunkin’ Donuts.

Cluster three is also interesting because it ranked high in all three brand personality appeal categories. Clearly the strategies these restaurants are employing are working to define their brands as clear, favorable, and original. While this cluster might seem like an ideal group to be a part of, we can clearly see with Starbucks that they have found a way to differentiate themselves and be successful outside of this cluster. So, while this cluster might seem desirable because of its high scores, it is more about positioning your brand rather than trying to just be a part of this “high ranking” cluster. With that said, being a part of Cluster one might be concerning as they score the lowest in all five brand personality traits and all three brand personality appeal rankings. Cluster two, while not as low as Cluster one, could also work on branding themselves as more sincere and exciting, although this cluster of restaurants has managed to do well scoring low in the negative categories except Boring.

As mentioned in a previous study, we encourage marketers to consider not just their rankings but also the extent to which their respective brand personalities are differentiated by consumers. This study shows that Starbucks, while not ranked the highest in every category, has managed to differentiate their brand enough to be clustered into their own category. This is something that other restaurants may look to replicate. This could be done by targeting specific brand personalities and improving those to stand out from other QSRs. For example, Chick-fil-A rather than looking to improve their Ruggedness score, an area where they score low, could focus on increasing their Sophistication. This could help to break them out of the pack and really help their brand stand out for being truly exceptional and distinct.

The Zion & Zion research team encourages marketers to look at how they want their brand to be viewed by consumers and look for ways to distinguish themselves from the competition. Figure one clearly shows that all QSRs have similar brand personalities but by picking and choosing specific areas in which to improve, brands can distinguish themselves from the competition and gain a competitive advantage.

Next: The Effectiveness of “Buy One, Give One” in Promoting Product Trial