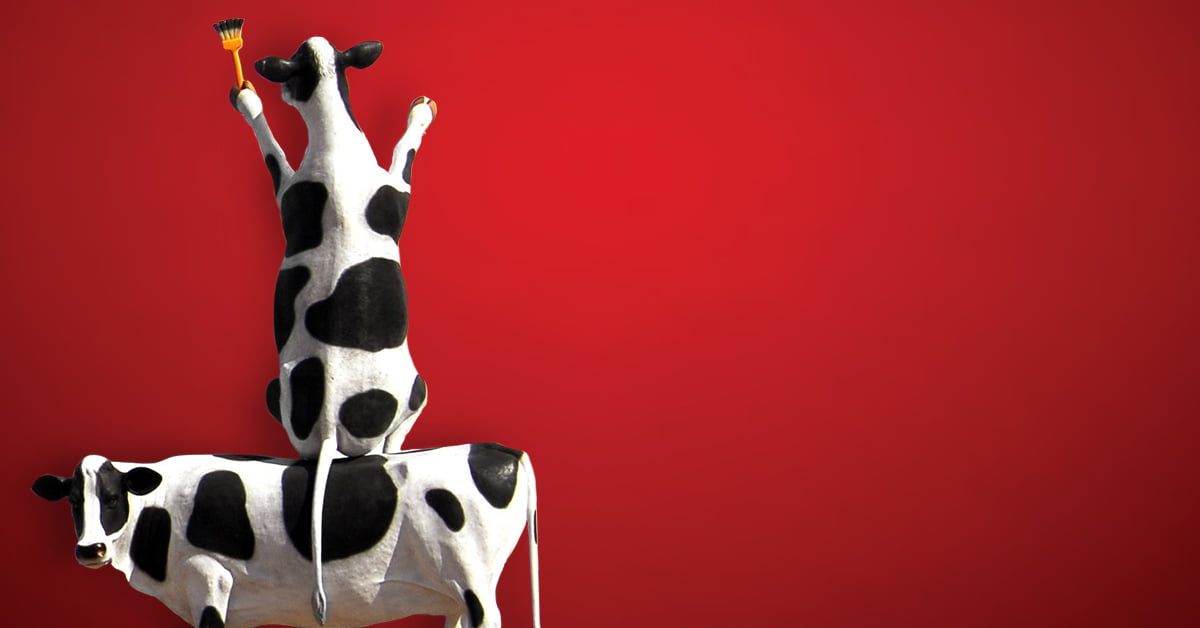 Many brands are searching for new ways to differentiate themselves and gain competitive advantage because of increased competition, the commoditization of many products and services, and generational behavioral shifts in loyalty. One opportunity for differentiation is to establish a specific brand personality so well-defined that consumers will choose (and stay loyal to) a brand even though other elements may resist differentiation (i.e., service, product selection, and price).

The Zion & Zion research team sought to gain a deep understanding of the brand personalities of the 26 largest QSR (quick service restaurant) chains in the U.S. We surveyed 4,363 adults 18 years of age and up. Each respondent was asked about one of the 26 QSRs. Our research team only included data from those who were at least somewhat familiar with the particular QSR they were being asked about. That resulted in a usable data set of 3,205 responses.

Employing Aaker’s Brand Personality Dimensions, the Zion & Zion research team conducted an in-depth brand personality study of the nation’s largest QSR restaurant chains. To accomplish this, a random sample of 4,363 consumers ages 18 and up from across the nation were surveyed, and each respondent was asked to evaluate a single restaurant on the brand personality 42 traits.

In order to ensure that the study’s results presented meaningful data, we only included responses from respondents who answered 5, 6, and 7 on the familiarity scale, which resulted in a usable data set of 3,205 responses.

Our research team chose to use a seven-point scale for brand personality as opposed to Aaker’s five-point scale. For each of the 42 brand personality traits, respondents were asked to consider to what extent each restaurant could be described as possessing the trait. Respondents ranked each trait on a scale of 1 to 7, with 1 being “not at all descriptive” and 7 being “extremely descriptive.” All questions in the survey and response options were randomized to control for any ordering effects or respondent fatigue.

Refer to the Chick-fil-A data point shown in Figure 2. This is the level of Chick-fil-A’s Sincerity perceived by respondents who were at least somewhat familiar with the Chick-fil-A brand. The error bars can be interpreted using the following statement: There is a 90% chance that the actual value of Chick-fil-A’s sincerity in the general population falls between 4.9 and 5.3.

Figures 2 through 6 each illustrate the comparative rankings of our study’s 26 QSR brands on each of the five brand personality dimensions. Note that the green-to-red color bars are provided solely as a visual aid to help the reader digest the distribution of rankings. 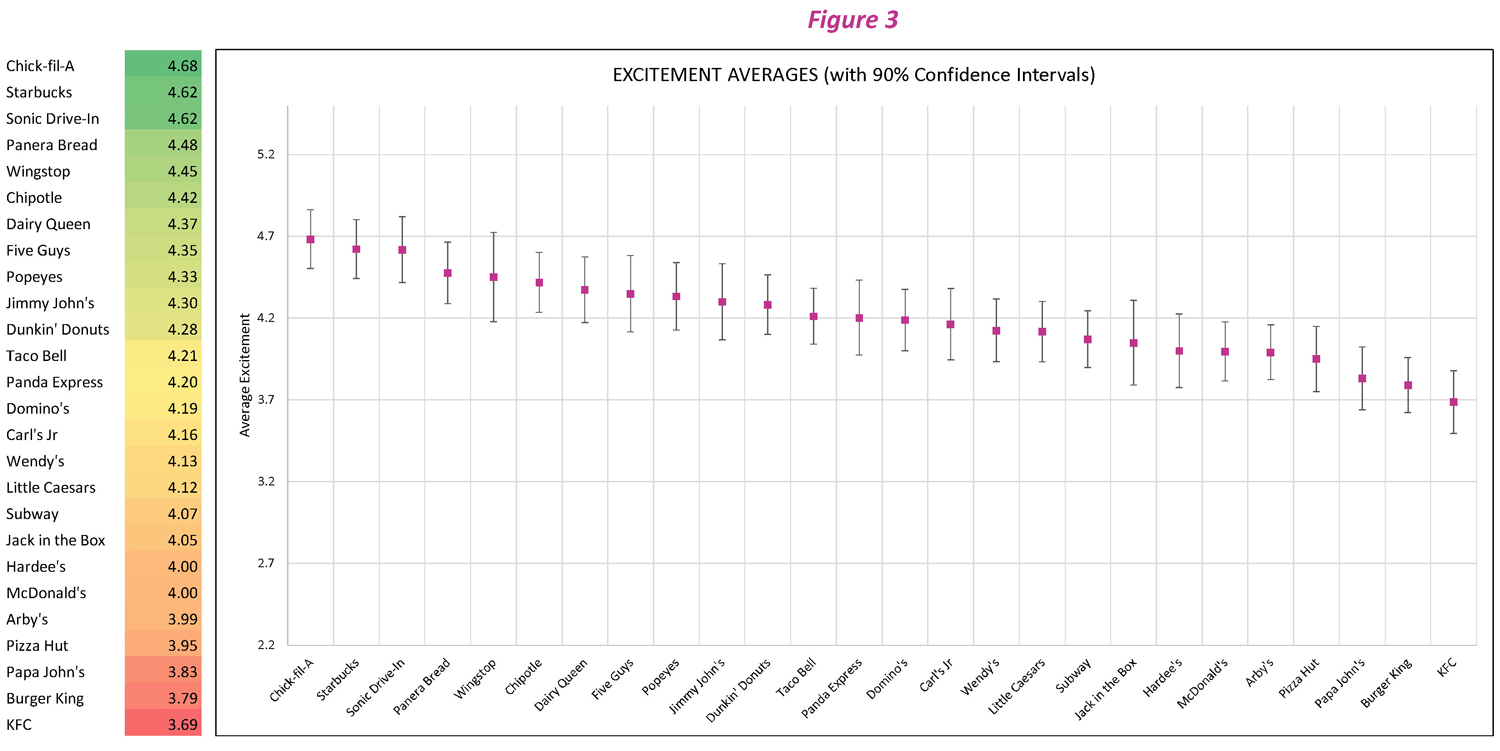 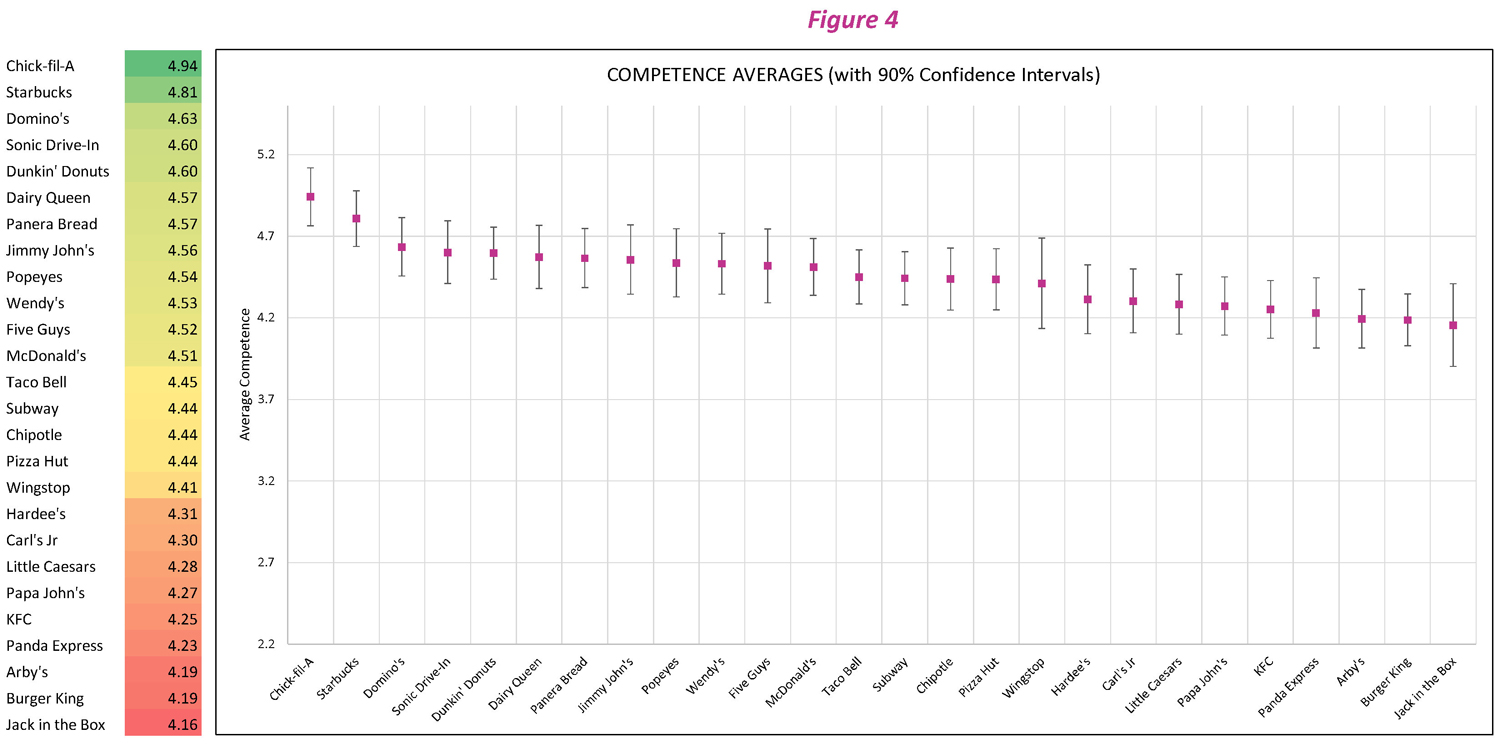 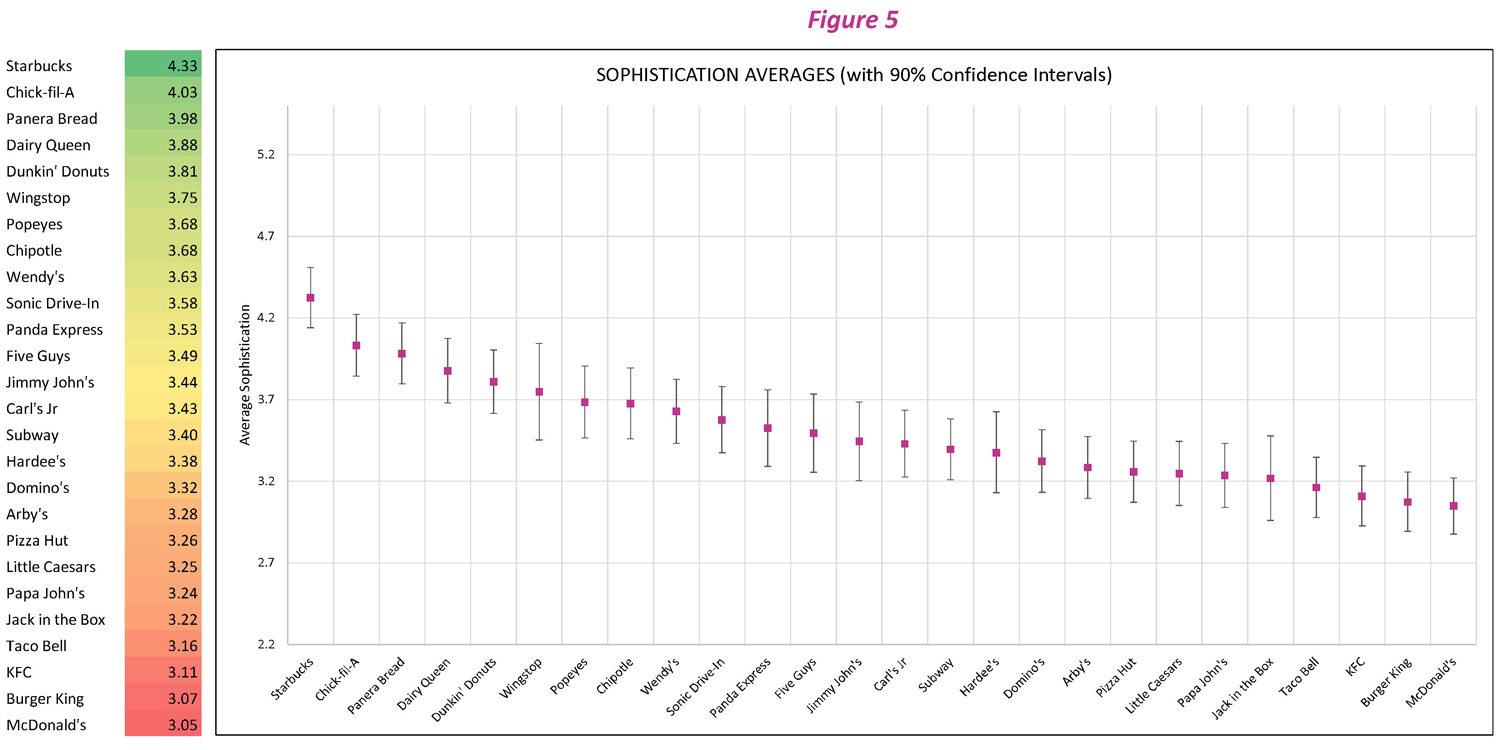 We urge caution with respect to being tempted to crown winners based on their brand personality rankings. The same goes for denigrating those that rank low on any particular dimension. The data is only a portrait of consumer perceptions—i.e., “what is” as opposed to “what’s best.”

For example, Starbucks leads the pack in Sophistication and McDonald’s trails the pack. However, Starbuck’s may indeed wish consumers to perceive it as relatively sophisticated while McDonald’s may not—although we suspect that McDonald’s would not wish to be in last place.

When it comes to Sincerity, however, it is likely the case that being perceived as relatively less sincere is universally undesirable by all QSR brands. Brands such as Papa John’s, Jack in the Box, and Burger King would be well advised to consider how they perform so low on the scale as compared with Chick-fil-A, Dairy Queen, and Sonic Drive-In, which are all statistically significantly higher performing (p<0.1).

Regarding Excitement, clearly many brands invest in cultivating an exciting image. Examples include Jack in the Box and Jimmy John’s. However, these brands fall short of those at the top of the range, with the leader being Chick-fil-A with a 4.68 Excitement score, while Jimmy John’s comes in at 4.30 and Jack in the Box 4.05, with the difference between Chick-fil-A and Jack in the Box being statistically significant at the p<0.1 level. Again, brands need to consider why this is the case and what they can do about it.

As for Ruggedness, whether a brand wishes to be perceived as rugged or not is clearly a positioning choice, and it is precarious to assert how a QSR brand’s individual Ruggedness score can be declared good or bad. Instead, it can merely be declared as the degree to which it is true that consumers feel that Ruggedness applies to the brand in question.

A basic tenet of marketing is understanding your market and those who you want to attract and creating a congruent brand personality.

It is worthwhile noting that the five brand personality dimensions do not share equal score strength ranges. For example, the highest-ranking restaurant chain for Ruggedness (Wingstop, 3.50) is less than the lowest-ranking restaurant for Sincerity (Papa John’s, 4.26), Excitement (KFC, 3.69), and Competence (Jack in the Box, 4.16). It is likely that the traits that comprise Ruggedness (i.e., outdoorsy, glamorous, good looking, tough, and rugged) are not as easily attributable to QSR restaurants than some of the other dimensions.

There is significant evidence and belief among both marketers and academics that brand personality is an important factor in achieving competitive advantage, and many QSR marketers clearly invest heavily in creating a distinct and strong brand image.

Our research team encourages QSR marketers to carefully consider where their respective brands sit on each of the five dimensions. The error-bar data that we have included allows for a QSR marketer’s review of our data to be particularly meaningful from a competitive standpoint.

We also encourage marketers to consider not just their rankings but also the extent to which their respective brand personalities are differentiated by consumers. This is the subject of another research study.

Next: The Gender Gap in Brand Awareness Rankings of the 100 Largest U.S. Charities