Cognitive and Affective Involvement: The Key to Advertising Effectiveness
(Part I) 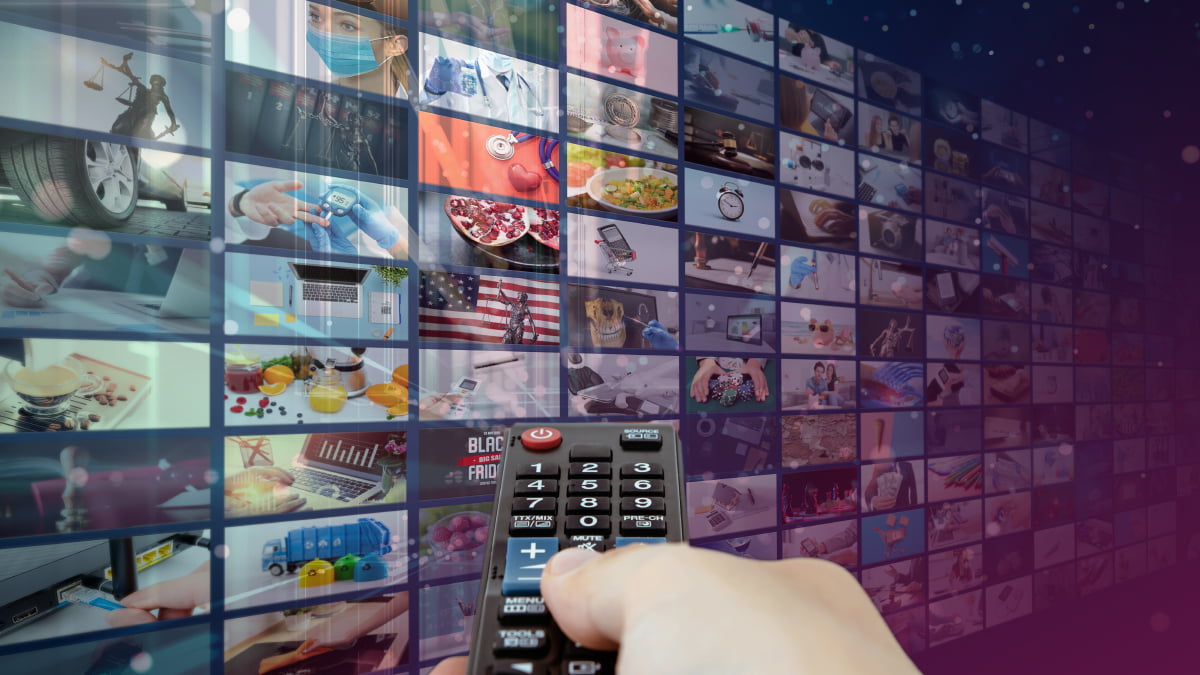 For over 50 years media planners have used Cost per Point (CPP) and a program’s demographic profile to select in which TV shows to insert a commercial.  CPP allows planners to screen an ad to a chosen percentage of a market’s audience for a given cost.  However, screening ads to consumers is not what advertisers are ultimately interested in.  Firms most often advertise to gain attention, interest, and desire for their products and services and ultimately to achieve financial actions on the part of viewers, such as purchasing a product or donating to a cause.  To achieve these aims, it is vital to the advertiser that consumers mentally process the commercial, not just that it appears on their screen.  What can advertisers do to bridge this gap?

Part of the answer lies in extensive academic research conducted over the past several decades on the role of the audience’s involvement in the program. However, what’s missing is the commercial availability of a database of information of cognitive involvement and affective (i.e. emotional) involvement ratings of TV programs and a meaningful synthesis of the dozens of studies that have been performed. These studies show clearly that ads are processed differently based on the context in which they are served. In fact, it would be odd if they were not. Context affects everything with respect to how human beings process stimuli. The mere fact that most planners have ignored this is unsettling. Certainly, brands advertise beer and chips during football because they want an association between the event and product consumption.  Brands sometimes try to align their image with the type of programming in which the brand’s commercials appear, however, these are only limited instances of brands and planners considering media context.

Our media and marketing science teams collaborated on a year-long project to digest and assimilate the available research, to conduct studies of our own, and to build a usable database of user-generated cognitive and affective program ratings for over 111 of network and cable television’s top-rated programs.

How meaningful is this? Placing an advertisement on a show in the top one-sixth of shows with respect to affective involvement, as opposed to an average show, will approximately quadruple the recall of the advertisement.

To better understand how various TV shows, help or hinder advertisers in that goal, Zion & Zion has built: 1. a proprietary model and 2. A database based on a large-scale survey of 2041 viewers resulting in more than 10,000 evaluations of TV shows.

The purpose of this article is to demonstrate a key missing piece in effective advertising.  The missing piece is the relative rankings of the two primary dimensions of involvement (cognitive and affective) with respect to different TV programs and how ads interact with these dimensions.  The model was constructed by our marketing science team based on 95 academic articles from top-tier academic journals.

The Zion & Zion Ad Effectiveness Model is based on our media and marketing science teams’ original research and on 95 articles from academic journals, focusing on the way that TV shows facilitate or hinder processing of ads by making consumers more or less emotionally (i.e. affectively) and intellectually (i.e. cognitively) involved.  This groundbreaking model has been applied by our agency in multiple client contexts and should change the way all media planners go about selecting which programs to air their advertisements on. 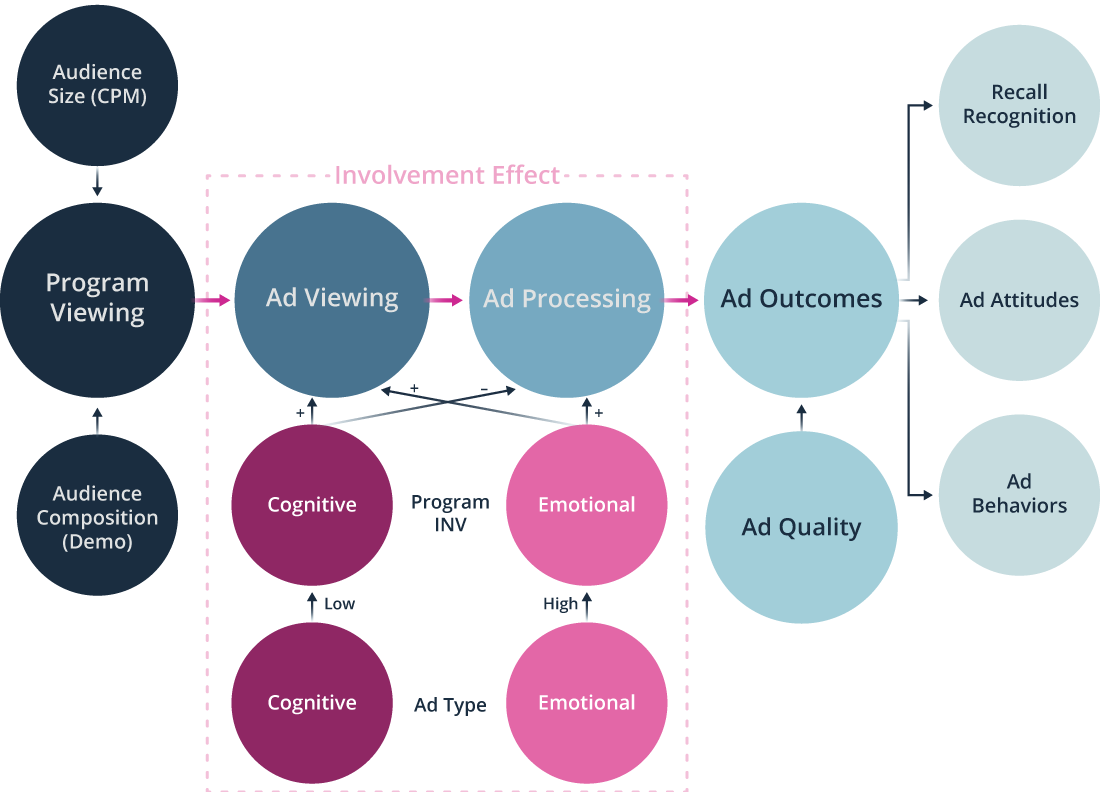 First, we will examine just the portion of the model shown below: 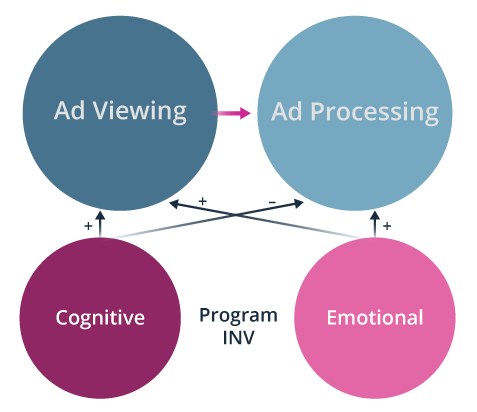 The model shows that if the program has high emotional (i.e. affective) involvement that Ad Viewing and Ad Processing will increase.  Conversely if the program has a high cognitive involvement then Ad Viewing will increase because the viewer is highly involved in the program, however Ad Processing will decrease because the viewer’s mind is thinking about the show and is using his or her cognitive resources to that end.

Next, we will look at the model components below: 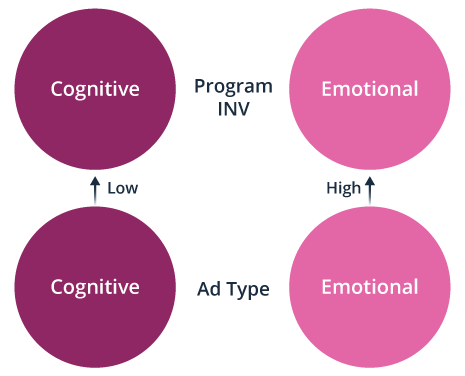 However, shows that pose a processing challenge for ads could still be a good fit for the firm, if the show and the firm’s branding are strongly aligned. For example, a technology company may still choose to advertise during a highly scientific program because they want to associate their brand with the subject and the intellectual positioning of the show. This gets into the area of sponsorship, which is beyond the scope of this article.

The effect of low involvement vs high involvement is staggering. For example, if show A is in the top 16% on involvement and show B is average, then data shows that an ad aired on both programs has an average of double the recall on show A compared to Show B. If both shows cost the same amount to advertise on, then show A will be twice as cost effective with respect to recall.

Our model and the research that backs it up also show that highly emotional advertisements will benefit from being shown with programs that are also high in emotional involvement.  It also shows that it is best to have a simple advertisement rather than a highly cognitive one.  These ads will do well when paired with highly cognitive programming because the viewer will be cognitively stimulated and will have better ad recall. In the next article we will discuss how the these 111 programs score on both cognitive involvement and affective involvement scales.

Next: Are All QSRs Created Equal? A K-Means Cluster Analysis