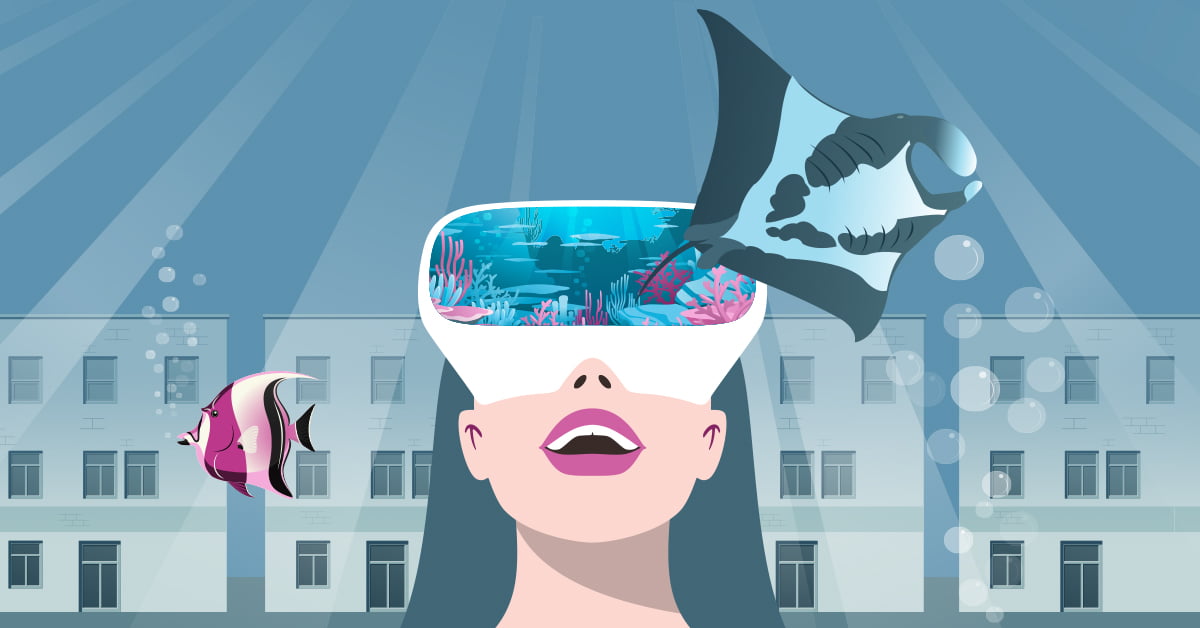 What is virtual reality? What is augmented reality? And, what is in store for the future in regard to both of these? Let’s start by describing each.

Virtual reality is an interactive, computer-generated experience that takes place in a simulated environment. Typically, a person wears fully enclosed goggles or a helmet, closing off any sense of the outside world.

Augmented reality is an interactive experience of your real-world environment where objects that reside in your real-world are “augmented” by computer-generated information. Information about your environment and its objects can be overlaid on the real world. A user can wear something like Google Glasses or use a phone or tablet to interact. Augmented reality is used to enhance environments or situations and offer enriched experiences.

What it boils down to is that virtual reality is more like being inside or surrounded by a video game, where augmented reality is your real-life environment, but with layers of digital assets intertwined into your reality.

I also remember the first time I experienced augmented reality in real-life (not just watching an online demo). It was about five years ago using an app called Word Lens (since bought by Google in 2014, and is now called Google Translate). The mobile app translates languages by pointing your camera at a sign and then translating the words into the language you designate. The app translates the words in real time, using same fonts/styles as the item you are viewing. It’s amazing, I encourage you to try it out.

Some other examples of augmented reality

We’ve all seen the cute animals we can become with Snapchat’s flooding introduction of augmented reality to the masses a couple years ago.

Additionally, there are graphics in televised sports. For example, NFL televised games. The blue line and marker graphics that move across the field are examples of augmented reality. Another sports application of augmented reality that’s been around for a while are the Olympic swimming graphics showing the swimmers name and country on their lap lane. It is going to become more common to use this type of technology to show play stats, plays, and of course, advertising during games.

We will be seeing more virtual uses in the medical industry, by doctors and dentists, helping to guide them in diagnosing and surgical procedures. Augmented reality will branch out into auto repair and structural maintenance, allowing people using the technology to build and repair cars and machines. I also predict there will be more 4D augmented reality games in casinos, where players can interact with 3D graphics, using motion detection. This will also soon be incorporated into movie theater experiences…there are just so many opportunities!

What does this mean for the advertising industry?

There are going to be a lot of new ways to get creative with advertising. Pepsi created this augmented reality advertisement that was installed on the side of a bus shelter.

You can also use augmented reality in online app shopping experiences like Wayfair or Ikea, where you can choose almost anything in their online catalog and see what it would look like in your space, enhancing user experiences.

At Adobe MAX in October, they did a walk-through of an example of how the augmented reality can come to life in a retail space.

Hybrid entertainment applications are going to be a huge trend as well. For example: Disney theme parks have created an augmented reality game app for when you are standing in line; to make the long wait times go by faster. The games are designed to be played by the whole family or a group of friends, passing a device around, so that it’s a social experience. Some of the clues you’ll need might be hidden in the line waiting area, and because Bluetooth beacons are used, it will trigger parts of the games near you at the time. They will also be using beacon sensors to know your place in line so that the game can scale, so whether you waited for 20 minutes, or two hours you’ll feel like the game is completed when you get to the end of the line and enter the ride. Other augmented reality elements in the Disneyland app are things like, at Space Mountain, you can launch rockets to fly above you before boarding the ride, and wayfinding inside the park. The great part for a company creating technology like this, is that for example with Disney, they can change the digital content of the app so that every visit to the park is a different experience.

What are Bluetooth beacons you ask?

You may (or may not) remember a little bit of hype around beacons a few years ago. Estimote sent out some super cute, non-privacy-threating-looking beacon development kits and heavily promoted them. Bluetooth beacons are hardware transmitting devices programmed to broadcast to nearby portable electronic devices. The technology enables smartphones, tablets, and other devices to perform actions like triggering in-app experiences when near a beacon.

For me, as an art director and designer, one of the things I’m super excited about is Adobe’s augmented reality tool called Aero. It’s the next breakthrough medium for creative storytelling. Here’s a demo from Adobe MAX.

What is in our not too distant future?

Hyper reality, for instance, how about virtually presenting to clients? Star Wars and Star Trek have always been a source of inspiration for future, so rendering people virtually, like Princess Leia could mean better collaboration.

Kids (like my 7-year-old) are already learning how to program technology in first grade. But, I strongly feel that it is important to incorporate the physical world within technology. With the push to “unplug” and enjoy the life around you, I see the future as being technical. However, since computers will be programming for humans soon, future generations should cultivate human skills that can’t be replicated by machines or computers. In addition, people are going to get tired of constantly being on devices and will be yearning for authentic real world experiences. I see the future of all this technology being even more of a mix of physical and technological worlds, and augmented reality will be part of that future.

So, hang on to your hats because the faster our resources get, like broader access to wifi connections and 5G, and the more advancements in wearables and internet of things, the quicker we will see more and more virtual and augmented reality in real life.